Christeene @ Islington Mill: We Are All Going Through The Same Shit by H. Me 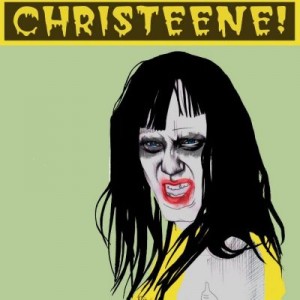 ABOUT halfway through this gig a friend called Antoine in his favourite Alien Sex Fiend tee was shown a red rectangular piece of cloth by a  tattooed woman. Dangling from the centre of the material was a ribbed three-inch piece of black rubber about as long my ring finger.

“I was near the back and it still managed to hit little old me in the face,” Barbara said amazed.

“That’s Christeene’s butt plug,” I yelled into Antoine’s ear and pointed to the band on stage, “she pulled it out and wenged it into the crowd during the opening song.”

Before he could say anything both our faces fish hooked as we caught a whiff of brown town causing us to flinch backwards. A moment later he flung the offending item back across the dancefloor.

“Mental,” he said as he absent-mindedly wiped his hands across the front his tee. I went to the loos to wash mine. Barbara followed and washed her face.

The tidy arse the butt plug came from belongs to Paul Soileau a drag artist currently residing and honing his electro-punk-rap-nuts music in Austin, Texas. Christeene Vale is his second creation and she is not your usual fayre. Noted for her weird looks, trampy black hair, a string vest and heavy smeared make-up around a mouth housing a gold front tooth – Christeene is more like homeless person having a bad hair day about to go all Texas Chainsaw Massacre on our asses.

“When Christeene came out of me,” he says on his Wikipedia page, “I was searching for something that had the action of a switchblade in my pocket – a character I could put on quickly but effect people in a much stronger way. There’s a lot of social and political commentary going on. It allows me to process and understand me, Paul, as a queer, as a southern boy.”

“I know you people have got something special in your hearts and in your assholes,” she compliments.

“Just keep doing what your doing. Keep being you. You don’t need me to tell you,” she urges.

“We are all going through the same shit,” she relates.

Let’s make no bones about it. We were all gone. Egos vanished into air, flimsily constructed personalities melted away as the relentless throbbing gristle of their sound gouged us into being.

“I’m so confused,” shouted a lesbian next to me, “I want to fuck him.”

Watching songs like Tears from My Pussy and African Mayonnaise, as provocative as they are on Youtube, doesn’t prepare you for the live club show. Like Peaches gone before Christeene manages to sculpt sex and pain into vicious beauty with a knowingness and honesty and depth you don’t normally get from drag acts unless you’re at a David Hoyle show. You could be forgiven for thinking this review is promulgating a notion that gay culture revolves around cock and arse. It’s not. Beneath the sexualised motifs of Christeene’s act hidden in the words and beats is a message that’s all heart. A black electronic heart maybe but one nevertheless delivered with devilish ironic wit and sheer grime.

The song slowly / easy is like making it through a carpet bombing and finding out your the only survivor.

I can find no better reaction than Bubble Shield’s comments on Youtube to explain the power of this song:

And shit myself and Died

(you can’t make this stuff up)

In the mosh-pit bodies buzz and hum. Sharp fresh odour, the fruit of a committed dancefloor, stung my nostrils as vital nervous energy got a welcome release. It poured from the blinged up man who used to work at Kim-By-The-Sea with flesh tunnel ears; from Zsa Zsa Noir tottering on her to-die-for legs; from the Chinese Lala who kept slipping in her own spilt beer; from the literary gays in their cut-off rock tees; from the hipster gays in their tight trousers and soft shoes; from the academic gays in their clean tees; from the andros; from the straights; from the staff at the back; and me.

The venue plays no small part in this. There is something about Islington Mill that elevates events into nights where you know you’re going to come alive. It’s been a haven for the avant-garde and underground for so long now, the mill has become a sprawling feeling spread across the city, something warm that stirs the in the chest and loins like a promise waiting to be redeemed the moment you step across the threshold. In part a gay hacienda, in whole a springboard for artists to contribute something special to life. Izzy Mill Head Honcho Bill Campbell once told me that it was important that a space existed where people felt free for anything to happen because that’s where true creativity is born.

Christeene performed as part of Off With Their Heads and Tranarchy’s Bummer Camp at Islington Mill on the longest day of the year supported by Zsa Zsa Noir, Kurt Dirt and a bouncy castle.

A special shout-out goes to DJ Louie from Sapphic Traffic. His donky-wonky dance set made my eyes bulge like eggs. More of that please!