Save Alexandra Park Trees: A Love Letter by Teresa Green

It’s been nearly three weeks since we started hacking trees off you left, right and centre. My heart breaks into a thousand pieces that we can’t fix the damage that has been done. Please forgive us. I owe you so much. Many a morning I’ve woken and been unable to get out of bed but the mere thought of running through the outstretched arms of Red Sycamore Avenue boughed heavy with green, yellow, orange and red leaves has motivated me to get up for years. You make me want to live! And all from trees that just stand there. But RIP Red Sycamore Avenue. You are no more. You have been felled nee murdered. And lie horizontal on your backs like lazy cheap whores instead of being my first true love of the day. On the second Saturday of protest I walked with Nev, a mountain of a man, in his grey towelyn hoodie and matching trackie b’s down Newly Decimated Avenue, we both had tears in our eyes and we almost held hands.

I couldn’t say anything. The sight of light brown discs of wood chainsawn open and scattered through the park like lost Connect 4 counters was too sad for words. 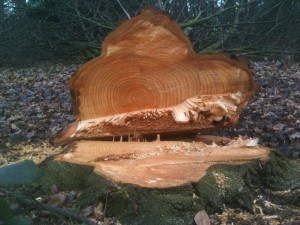 But for that moment as strangers we were brought together. Amongst the tree graveyard are some tattered tents. More strangers brought together. The strange brothers and sisters of Moss Side and Whalley Range and Trafford. They have been here since the felling began three weeks ago. I don’t know what they’d be doing normally if they weren’t trying to save the park trees. When you look at the destruction of 50 of the 400 trees already taken down to make way for tennis courts the situation seems hopeless. Yet the protestors have hope. This is the sign of first rate intelligence and compassion in human beings. Being able to find hope in a hopeless situation. Lots of them have become ill from their cold and wet vigil day after day and night after night in the park. Some days a bearded black leather jacketed protestor psychs out the police by filming them with his camcorder in their faces and on demo Saturdays when the community comes out in triple figures he rouses them with shouts of Whose trees? Our trees! Another protestor says let’s go to the homes of the council and start chopping trees down in their back gardens and see how they like that. A cop snickers at a woman who is shouting until she’s blue in the face that he should speak to his boss about quitting because it isn’t his job to kill birds it’s his job to save them.

Oh Alex I’m sorry your trees are being torn down and wildlife put at risk for tennis courts. Apart from the glaring fact that the park has tennis courts already albeit run down and in need of some TLC, and if we’re being honest, much like the rest of you. You are a big raggedy and do need a bit of a facelift. But tennis courts?! FFS. London creeps closer every day. We are not Manchester-upon-Thames. It is an urban park. It has an urban edge. Some days when I’m running through you and stare at the over-grown bushes I wonder if someone’s going to jump out and mug me. It makes me run faster. I am going to live longer. You are life-giving. So I’ve come to visit you again today on Valentine’s Day to show you some love. There are only two protestors left. A man and a woman. It feels like the end of the affair. A strange garden of Eden with not an apple tree in sight.

No says the owl-like woman grabbing my arm earnestly we are not here to stop them we are here to make them question how they’ve done this. We are wholesome. We are right in what we are doing. As security dismantle the barricades she is worried they will now be arrested for camping in a public space. We move a tent backwards out of the swamp onto firmer drier land towards Claremont Road. She is right. In the end everything will be alright even if it isn’t alright. Mother Nature shall prevail and the trees shall all grow up and rise again. She is too powerful and does after all own all of the higher moral ground.

Thank you Alexandra for being my lungs of the city,

It’s not over ’til it’s over. Keep supporting the campaign: