The Lovely Eggs – Sponsored by Greggs 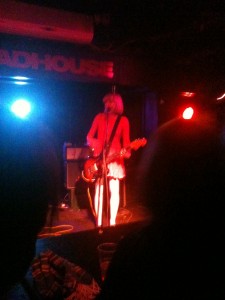 It’s now fourteen hours since I’ve seen married mop top couple Holly Ross and Dave Blackwell and The Unborn Bump perform at the Roadhouse, Manchester and I’m still up and I’m sure everyone else who was the gig has hit the hay. Just had a text from my gig-going partner in crime Bunny who told me they are faux-naive in their musical style. (Think that’s a posh way of saying they sound reet northern but are actually quite clever.) Three punks were in the mosh pit area backed up by old indie-heads. Things are still all well with the world when I see at least one punk and it was a good job they were there. Initially they danced like Morris pole people to Bad Grammar (the support band) but when The Lovely Eggs bulleted out the opening lines of Wildlife ‘there are five flies in this yard there are eighteen flies in this yard there are forty-nine flies in this yard’ a loose kind of hell broke through the crowd led by none other than the punks. It was nice to see and even better to feel. I saw the Eggs a while a go with my friend Lowri at a tea and cake do downstairs at Ruby Lounge run by Clint Boon’s missus. That was plain odd. It’s not every day you see the former Angelica front-woman and all her punk feminist shenanigans playing to the mother and baby crowd. But that’s somehow perfect too don’t you think? They also did a cameo as part of the Twin Peaks night at Islington Mill in 2009 as James and Donna but a lot has changed since then. In another parallel pop universe they had had a string of No 1 hits with Have You Ever Heard A Digital Accordion?, People Are Twats and the new Lancaster and Manchester national anthem Fuck It. In reality each album release new finds them little armies of fans including a guest apprearance by John Shuttleworth as the man with a sausage roll thumb in the vid for Don’t Look At Me I Don’t Like It. 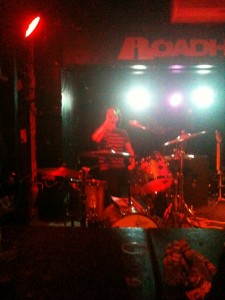 With their latest and third album Wildlife something is stirring. Everytime I turn 6Music on one of their songs seems to be on and lots of people I know from all different walks of life keep asking me if I’ve heard of The Lovely Eggs? Songs on their youtube hits regularly get into five figures and along with the John Shuttleworth patronage they’re reaching that status that other more fickle people than myself might accuse them of: Being Professional Northeners. You know the kind, Mark and Lard, Sara Cox, Liz and Andy Kershaw, Vernon Kaye and that other woman with blonde hair who’s name I can’t remember but is a stand up comedian with a deep voice and I think she’s called Jenny Eclair. Anyway you know the type I mean. There are loads more. And Jenny Eclair has the brilliant line that no-one with a northern mum can get depressed. That is what seeing The Lovely Eggs is like. The music is top. But their ace up their sleeve is lyrically and live they are a bloody good laugh and have not forgot the best part of having a sense of humour is to take the piss out of yourself. They happily fuck up songs. Laugh off missing verses. Have a great in-joke for all women in music with the song Dave’s Turn and at one point in between songs Holly patted the bump protruding from her stomach saying ‘sponsored by Greggs’. But best parting shot of night for me was going up to the merch stall and seeing a hand-written sign in big black marker which outlined the words that said: Shit Fer Sale.

The Lovely Eggs are on tour now.

Nikki Wordsmith bumbled about in her big wooly hat with Bunny and some punks and had rather a lovely time.